“Someone will automatically receive the message of an abstract image sub-consciously, without being able to put it into words, but if the image is experienced in pleasure and wonder, the understanding will be impressive and precious, whereas if the image agitates and disturbs, the ideas inherent in the piece will always seem unpleasant to the viewer and will gladly be forgotten”. —William Moritz describing a pet theory of Oskar Fischinger, Optical Poetry

After leaving San Francisco in 1993, I found it impossible to continue working in film without the benefit of resources the environment held, regardless of my economic status. Thus my filmmaking career lapsed into a restless coma. My attempts at computer video in the last half of the nineties failed for mostly technical reasons. The advent of personal computers with adequate power and economy allowed me to create Circle and Line Study in 2001. This triumph provided proof of concept for my first fully realized digital work, 110303 (2003). The Study validated the desktop authoring of DVD-Video. While my films had been confined to a low-fidelity mono sound track and a 4×3 aspect ratio, the formal properties of the DVD afforded my newest works a 16×9 picture and Dolby 5.1 surround sound. I was for the first time, able to produce an entire work without dealing with time consuming and costly laboratory methodologies or institutional facilities. Thanks to the advent of digital video and affordable computing, my career as a moving image maker had been revived from a cold dank slumber. And with this new awakening, I moved away from the congested issues of the past and began focusing on my latest concerns, elements such as form, structure, abstraction, and rhythm.

These factors became evident in my first completed work since War-Heads (1993), the computer animated video, 110303 (2003) a fully realized version of Circle and Line Study (2001). Using only a few seconds of DV footage and vector shapes, they were composited into numerous five second animations, and repeated four time sequentially. Numerous grids and circles slide into the distance. Layers stacked upon layers create the impression of depth and controlled chaos. Patterns of color and line shifting simultaneously in multiple directions appear to be calculating an unknowable equation. What look like smoked pains of glass may actually be data carriers, quickly moving information from one sequence to the next. In 2006 a short follow-up to 110303 using the same methodology was created entitled GridCode. Only 2 minutes in length, its repetitious moving grids look like an extended trip across a circuit board, while its electronic beeps time the imagery like a digital heartbeat. Another Grid series exists which was begun in 2003-2004 but never completed because of the limitations of mpeg-2 compression.. This untitled work was simply to detailed and could not be authored to DVD without unacceptable artifacting. However, with the advent of the H.264 codec and High-Definition video this unfinished project will be revisited in the future. 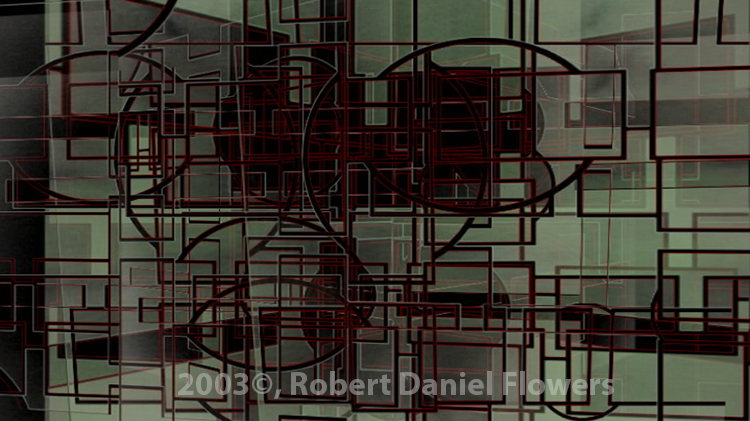 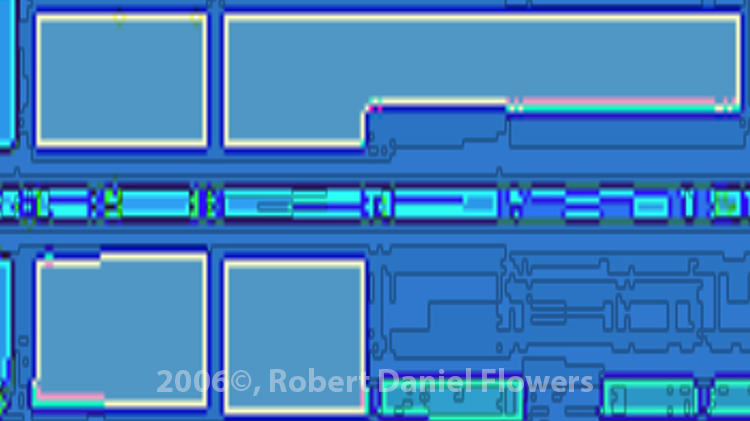 My next completed work SkyClimber (2005), is named after the manufacturer of suspended access equipment used by a crew during the restoration of the the Federal Building in Downtown Dallas. It was during their work on approximately the sixth floor that I recorded their actions from my loft apartment. During the rush to setup the camera, I failed to set the white balance correctly leaving the footage with a striking yellow cast. Rather than attempt to color correct this accident, I decided to edit only this material. The video taping ended abruptly when one of the workers seemed to notice me through one of my large windows. Fearing the authorities would soon be knocking on my door, I decided not to risk further sessions. I began editing furiously for weeks and when I was finished, the nine and a half minute sequence had roughly one-thousand edits in picture and sound. In fact more edits than the sum total of all my other works combined at least until that time. With image cloning, jump cuts and a complex soundtrack, SkyClimber became my most taxing endeavor. 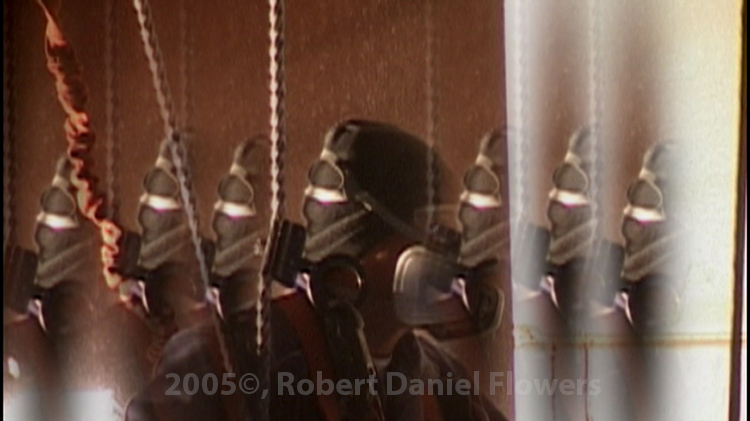 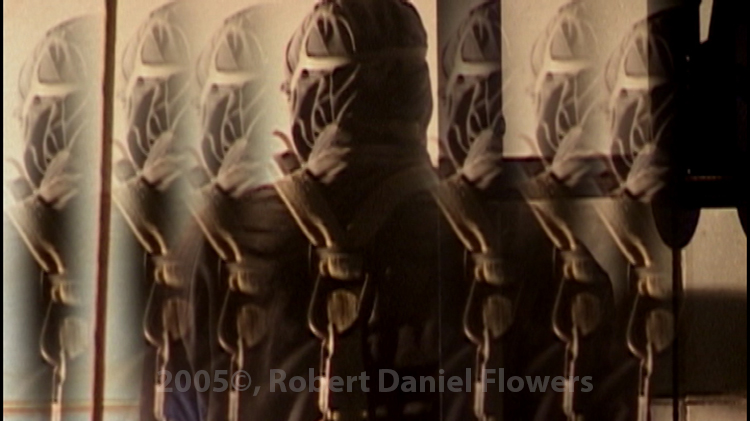 The nine and a half minute Light-Bearer (2005) was assembled from several minutes of digitally painted frames. In many respects it has some of the characteristics of a Flicker film, it assaults the retinas and leaves trace images behind, how ever briefly. These types of films are known to cause epileptic seizures in some viewers and thus provide warnings to this effect. Those not susceptible to often report seeing various things on the screen, such as objects or words. Colors shift around black holes which permeate the image, both beautiful and daunting it recalls the other meanings of the works title, the Morning Star or Lucifer. Its soundtrack is a mix of audio sent back by the Huygens probe during decent and portions of Gregorian chant. 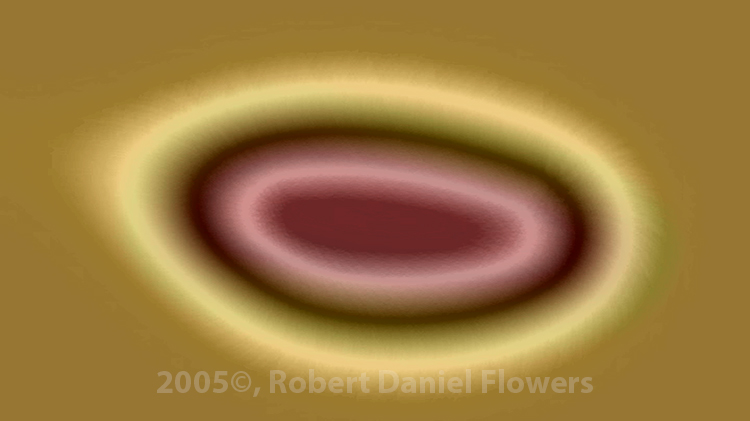 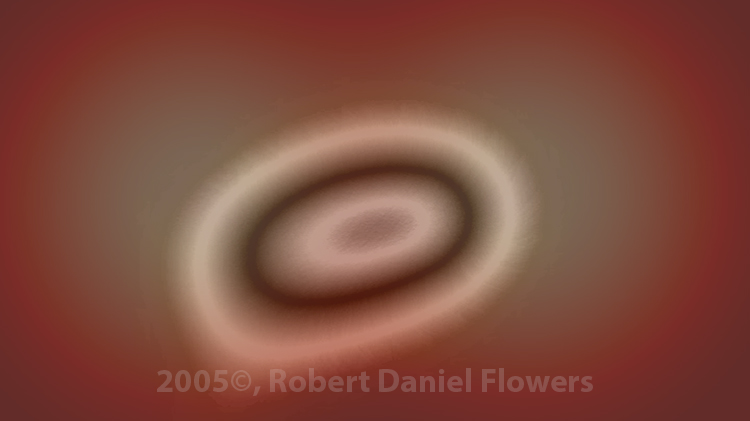 Unidentified Foreign Objects (U.F.O.s) (2006) is an assemblage of different material. Unrelated footage of two men in completely different conversations, along with voices in a dialog not their own, are edited together to appear as a natural event. Their faces are mosaicked as if to hide their identity, but the real purpose is to hide their lips which speak to another script. A radio program about UFOs is the narrative, its content becomes that of the two men onscreen. In the background as if weathermen in front of a green-screen, triangle shaped objects move erratically through a grove of trees, replacing Today’s Outlook. While the audio speaks to “little green men” the scenery reflects the conspiracy’s of crypto-zoology and the sacred narratives of mythology. 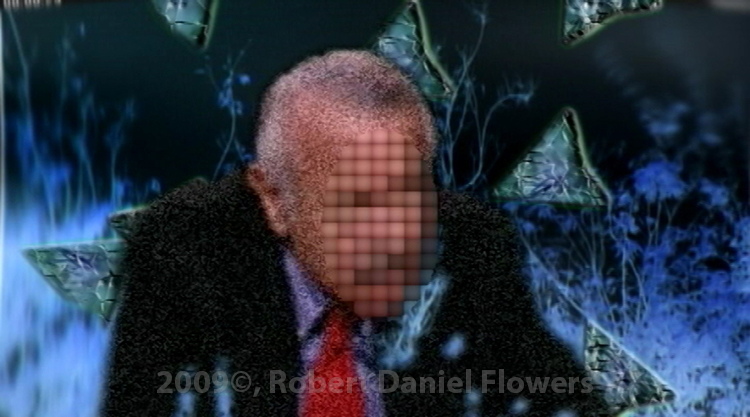 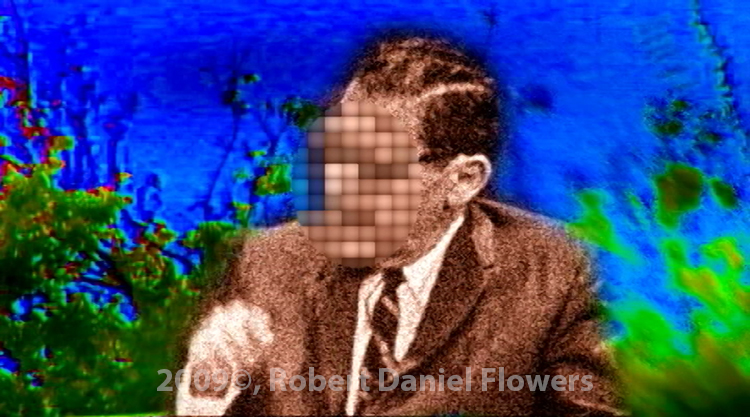 6 videos for Octa-Screen Display (2006) was designed using parts from six previous works to display on the massive and mobile high-definition outdoor screens of the American Airline Center in Dallas Texas. Unlike the photographs, the videos were to be spread apart in a staggered pattern across both sides of the courtyard. Each side was to display a different 4-part looped sequence simultaneously with the intention to create an animated valley.

Alien Life Study No.1 (2007) was to be the initial trial of a much larger work encompassing a greater variety of visuals with the same techniques, digital air brush and vector shapes. Though the original files remain, those used to create this study are lost. The discovery of frozen moons in our solar system with the probability of liquid oceans underneath fueled my imagination. Surely something lies beneath, perhaps something not unlike the Giant Tube Worms miles deep on our ocean floors. 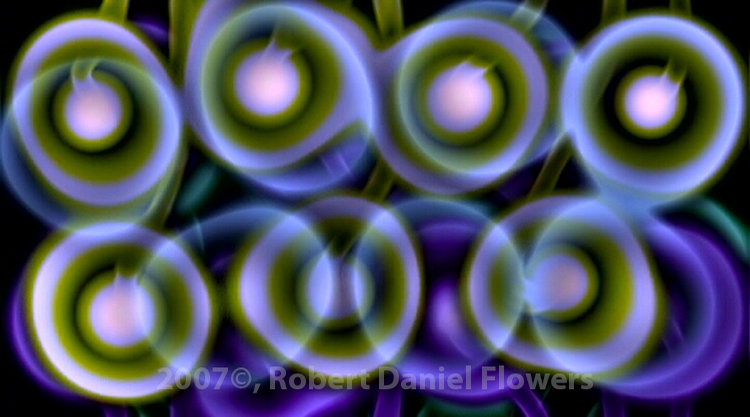 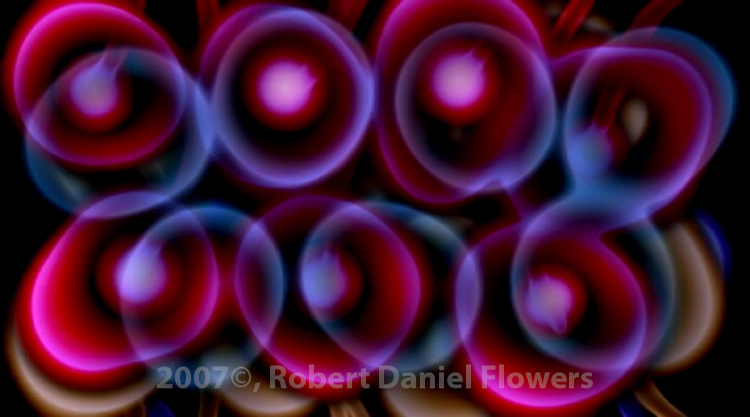 Stereoscopic Experiment for Audience No. 1 (2006) and No. 2 (2007) were the third and fourth works created using a digital air brush and vector shapes. These tools were used to create simple Platonic forms, a triangle, rectangle, and circle. The first of the series was created for anaglyphic 3D viewing. Though successful, resolution issues and the access to bright displays soured by enthusiasm. Today however, 3D televisions are common place. With No.2 I discarded the complexities of 3D viewing and added more sequences with a heavily mixed and synchronized sound track. Both of these works are my homage to the early pioneers of abstract animation. 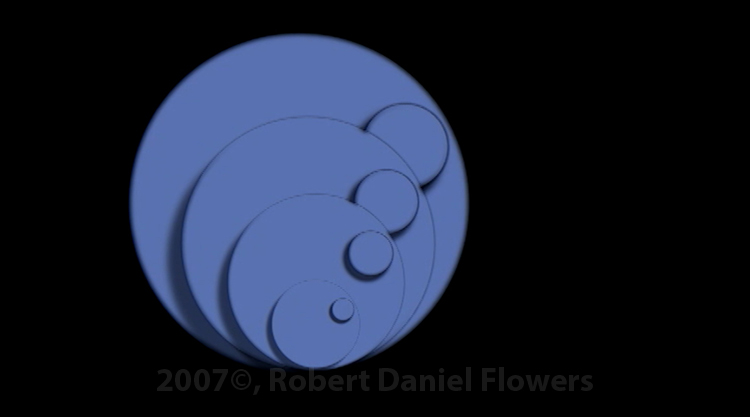 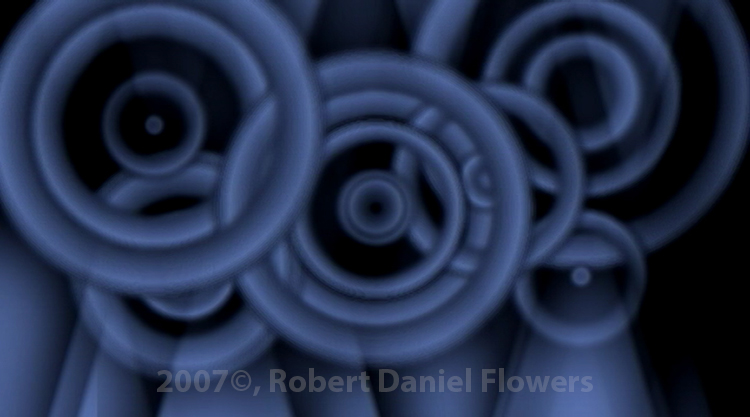 (Stills from Stereoscopic Experiment for Audience No. 2)